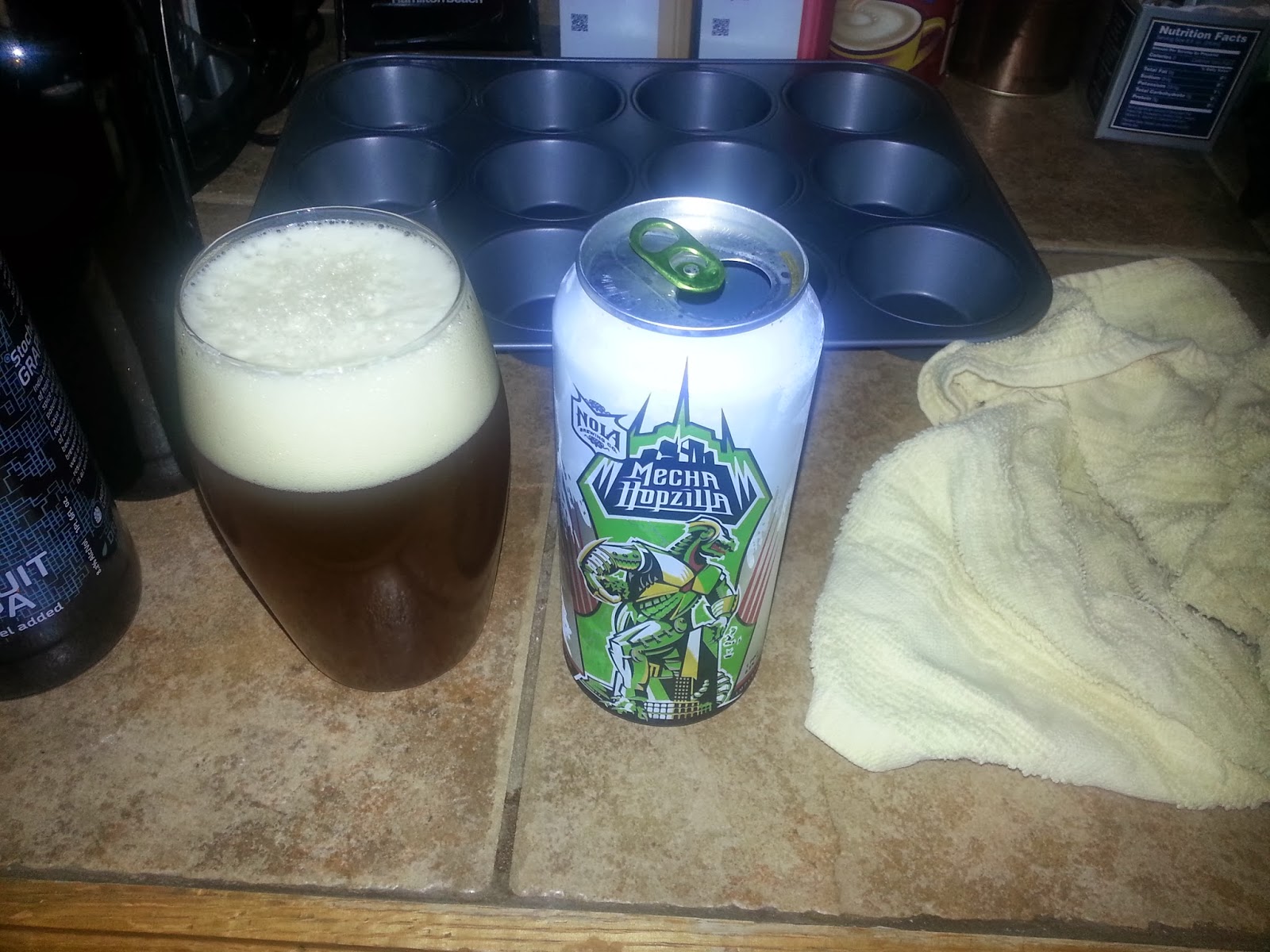 Considering I just reviewed Ghost in the Machine, and it's just after Mardi Gras season, it seemed appropriate to review the original Louisiana IIPA.  NOLA doesn't have anything on their website about this one and may be forced to change the name due to the Japanese corporation that owns the Godzilla franchise.  The can (which is why I bring up Mardi Gras) says, "This 'Hop Monster' is an American Imperial IPA boasting Bravo, Columbus, Centennial, and Citra hops.  Beware of MechaHopzilla's powerful flavor and its attack of half pound per barrel dry hop aroma.  Not for the faint of heart or palate.  Hop heads, this one's for you!  Brewed with love, brewed in New Orleans."

Aroma: Woody pine and a hint of mint up front.  Moderate citrusy hops (grapefruit and a hint of mango). Medium bready malt.  Just a hint of warm alcohol. 11/12
Appearance: Slightly hazy gold/orange with thick rocky white head.  Tiny bits of hop matter here and there.  Good retention.  Mix of a few medium and plenty fine bubbles with excellent lacing.  3/3
Flavor: Woody and citrusy bitterness.  Woody pine lingers with moderate bready malt balancing it out from being harsh.  A touch of warming alcohol is barely detectable.  No diacetyl or other off flavors.  18/20
Mouthfeel: Medium bodied with a balance only slightly towards the dry side from the hops but not astringent.  Maltiness keeps it from being a harsh bitterness.  A little tingling from the carbonation and warming from the alcohol.  No diacetyl slickness.  5/5
Overall Impression:  An extremely well-balanced IIPA for my tastes.  Solid malt backbone to balances out the hops.  West coast fans probably aren't going to like it, but one of my favorite IIPAs.  9/10

That puts it as a 46/50 in my book.  I'm not a huge hop head, so I prefer the maltier IIPAs, and this one fits the bill.  I score it in the same ballpark as Ghost in the Machine but they're different sides of the IIPA spectrum.  I guess the funny thing about perceptions is that if I didn't know which hops were in it, I'd swear Northern Brewer was in the mix.  That initial woody with a touch of mint is textbook Northern Brewer (Anchor Steam is a Northern Brewer showcase).
Posted by Unknown at 4:43 PM No comments: