Does glassware really make a difference?

So often when we go out to enjoy a few adult beverages, many bars and restaurants just pour them into the same thing: a shaker pint.  Named after its purpose, a shaker pint is what bartenders cap the shaker with to mix up a cocktail.  Most bars also use them to serve beer for one simple reason: they're easy to stack so they are cheaper from a space perspective.  Maybe if you're lucky, your bar has nonic pints.  Those are the ones with the bulge about 1/4 of the way down from the top.  But the question is, does it matter?  Recently, I had the opportunity to attend an event to find out.  To celebrate their recently installed 200BBL brewhouse, Abita Brewery invited some people in the homebrewing and beer blogging community to a first peek at the new setup and also to a glassware pairing conducted by Spiegelau.  In exchange for a nominal fee, attendees received a five piece tasting set and an Abita shaker pint (and the beer to compare).  First we toured the brewhouse, but that's not our focus here.  Afterwards, we all found a seat in the tap room for the real show for non-brewers.  The tasting was conducted by Chris Hillin, Regional Sales Manager for Riedel/Spiegelau, and Jaime Jurado, Director of Brewing Operations for Abita.  Now, on to the beer...

First up was Abita Amber: 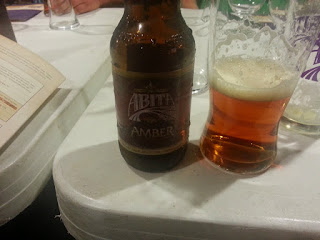 This beer is not an American Amber.  It's probably closest to a German Vienna lager.  Only the color is amber.  For this one, we were asked to pour half in the shaker pint and half in the lager glass.  I was surprised by the difference.  Normally Amber is on my list of last resort beers like Sam Adams Boston Lager.  In other words, if my draft options are BudMillerCoors or Amber, that's the only time I'm getting an Amber.  The shaker pint was the reason why.  It was dull, uninteresting, and lifeless.  However, in the lager glass it actually showcased some of the complex maltiness of a Vienna.  The reasons are twofold.  Primarily, the shape of the glassware is designed around highlighting the strengths of certain beers.  The lager glass has a relative large bell tapered to collect and focus the complex maltiness (think caramel and toasted bread) of many European lagers.  Second, the type of glass they use allows them to make the glasses thinner without compromising structural integrity.  They then showed microscopic cross sections of most glassware and the type they use.  Ever wonder why eventually your glasses get cloudy after many cycles through the dishwasher?  Apparently there are tons of microscopic pits and valleys in most glasses.  Another apparent benefit to the type of glass that Spiegelau uses is that it did not display these same tiny 'flaws'.

Our next selection was S.O.S. (Save Our Shore): 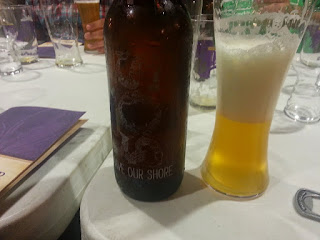 This is an unfiltered Weizen Pils (yeah, that style doesn't exist anywhere).  It was brewed to raise funds for the Louisiana coastal protection efforts during the BP oil spill a few years ago.  For this one, we actually poured part into the lager glass and part into the wheat glass (which is similar in shape to a traditional pilsner glass).  Yet again I was surprised by how much difference the glasses made.  The lager glass was OK, but the wheat glass really made the balance of hops to wheat and malt pop.  The process used to pair the beers and glasses is somewhat unscientific.  They basically get their tasters (or a combination of theirs and a brewery's if they're partnering) to try a beer in several different prototypes and then revamp until they find one that really makes a certain style shine.

And then came Spiegelau's claim to fame, the IPA glass and Wrought Iron IPA: 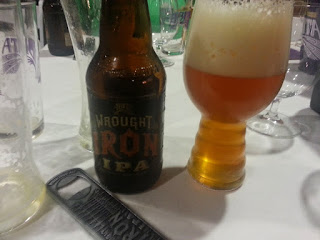 Abita has attempted to make it into the IPA market quite a few times.  So far, the results have been mixed for me.  Now, there's their new Wrought Iron IPA.  I had it on draft in a shaker pint a few days before the event, and although the nose on it was pretty good (Mosaic hops had lots of berry notes), the flavor was harsh grapefruit and disappointing.  In the IPA glass, though, it was actually pretty good.  The citrus, pine, and berry (with a touch of muskiness) were far more balanced.  The taste was also much less harsh.  In the shaker, it was exactly how I remembered it.  Designed with Dogfish Head and Sierra Nevada, the IPA glass has a few things going on.  The large bell with a relatively small tapered top focuses the hop aromas and keeps them around.  The wavy bottom actually serves to enhance the experience by creating nucleation points to release more carbonation when you get towards the halfway point in the glass.  When you tilt it to sip, you create more foam and release more aromas when you put it back down.  I'm getting sold on the concept by this point.

Next up was the stemmed tulip and Abbey Ale: 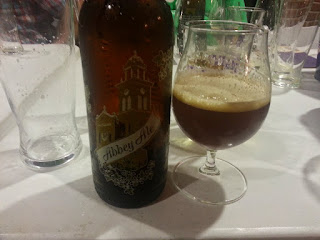 This is Abita's take on a Belgian dubbel.  This is actually where they sold me on the glassware concept.  I've had this before and it was pretty decent, but in the stemmed tulip, it was downright sublime.  My wife even commented that we needed to pick some up next time we had a chance.  The sweet breadiness of the malt and the banana and light clove from the yeast were showcased by the shape of the glass.  This one is made for most big malt bombs.  Think Belgians, Scotch Ales, Imperial Stouts and Porters, etc.  More on this in a bit...

The final official pairing was the relatively new stout glass and Naughty Quaker: 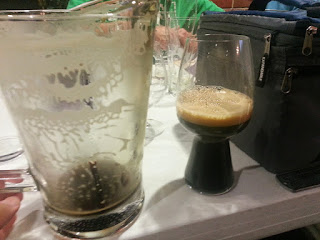 Naughty Quaker is an oatmeal stout.  It's part of Abita's Select Series which means it's typically draft only and rarely makes it out of Louisiana.  This is unfortunate, because most of Abita's really great beers have fallen into this series while the rest of the world only gets Amber, Purple Haze, and the like.  The stout glass is similar in some ways to the IPA glass except squatter and without the wavy nucleation points.  This tends to focus the roasty character of dark malt the most.  At this point, we weren't comparing anything to the shaker pint, but I had a glass in one when we stopped for supper on the way home and the glass truly does make a difference.  I generally don't like shaker pints anyway, but now I'm downright spoiled against them.

This was the end of the official tasting, but I had a pop quiz of sorts prepared.  I went up to Chris and asked him what glass he thought might pair best with a wood-aged Scotch ale.  He said it was probably a tossup between the stemmed tulip and the stout glass.  I told him this was the opportune time to test it since I had brought along a mini-growler of mine.  This beer is a strong Scotch ale which Jaime termed a "way heavy" after tasting it.  I took my standard Scotch ale recipe and aged it on a combination of light and dark toasted oak chips soaked in Macallan 15.  The clear winner was the stemmed tulip.  It really allowed all aspects of the beer to shine.  The dark fruit (raisins, plums, figs, and black cherries) combined with the vanilla and a hint of leather and tobacco from the wood were pretty amazing, if I do say so myself.  The stout glass really only showcased the wood: all barrel and no fruit.  In conclusion, glassware does make a difference in my opinion.  I sort of wish they made glassware suited for beer judging now.  Most competitions are based on the aromas and flavors you get from "airline cups", those ubiquitous cups that you seem to only see at homebrew competitions and on an airplane.  Scaled down tasters more suited to the styles would be a worthy investment for me.