When people find out I’m a beer judge, they usually have a wide array of responses.  Anything ranging from “Lucky you! Free beer!” to “Aren’t all beers the same?” to “What’s that supposed to mean?”  Sometimes there are even people who are aware of beer judging and have negative opinions of competitions due to prior bad experience.  Well, some of that is certainly justified.  I’ve gotten quite a few awful score sheets in my days as well.  In my opinion, there are two primary reasons to enter competitions: receiving feedback and winning medals.  In both instances, however, I think a little look behind the curtain of what’s involved in judging might help both camps.

The first thing to consider is the environment your beer is in.  Make sure to clean and sanitize whatever your bottling system is thoroughly.  Nothing is worse than having a beer that tastes phenomenal coming out of your kegerator getting a 29 out of 50 picking up some sort of infection or off flavor going into the bottle.  Next comes transportation.  If you ship your beer, you have no control over what happens to it when it gets to the shipping company.  If you really want to see how a judge will receive your beer, take a bottle with you in your car to work for two or three days.  Then stick it in your fridge for a week or two.  That’s probably what the judge is going to experience.

If you’re going for medals, there’s no better way to improve your brewing than by learning to judge your beer like the judges will.  Unfortunately, the nature of the beast with competitions is style guidelines.  No matter how great of a beer you may make, if it doesn’t fit the style, you won’t win anything.  By that same token, judges can’t give you feedback without having an idea of what you were shooting for.  If you enter a Pale Ale brewed with Belgian Yeast, it’s not going to taste like an American Pale Ale and will come off as though it was infected or fermented too warm.

In the meantime, you can get the things you’ll need assuming you don’t have them on hand.  Get a copy of the style guidelines from the BJCP website (http://www.bjcp.org/stylecenter.php).  Also, while you’re there, download a copy of the beer score sheet (http://www.bjcp.org/docs/SCP_BeerScoreSheet.pdf).  Get your hands on some clear 9 ounce plastic cups.  These are the same cups they give you on an airplane.  Basically a plastic cocktail glass.  Most independent grocery stores will have them.  I don’t usually see them at big box stores except for Sam’s.  A small LED flashlight and a mechanical pencil will also come in handy.  Now, I would assume you already knew what style you were going for when you put together your recipe or found it.  In this article, I’ll be using a beer sent to me by HomeBrewTalk’s nukebrewer as an extra in the Make A Wish (Easy Version) thread.  It is an Imperial Flanders Red.  That technically isn’t a style in the 2008 guidelines, but we’ll consider it part of category 16e (Belgian Specialty) for this exercise.  It could also be considered a Specialty Beer in category 23, but since it’s a bigger version of a Flanders Red (a Belgian Sour), 16e will probably give it the best chance.

Always consider the BJCP guidelines when entering.  They are irrelevant to commercial brewers and people who don’t enter competitions, but they are the only things the judges can go on when they review your beer.  All scores are based upon the conformance to that style.  For this beer, we would also reference category 17b since it’s a bigger Flanders Red.  Basically, it should show most of the characteristics of a Flanders Red with a higher alcohol content.

When it’s time to taste the beer, you want to have a quiet space with as few distracting aromas as possible.  Also, most beer competitions are judged starting around 9 AM.  Your palate and senses will generally be more sensitive at this time.  So, if you want the full experience, pick a Saturday morning to eat a decent, but relatively bland, breakfast and get ready to taste your beer.  Set up your stuff in that quiet aroma-neutral space, and sit the beer out on the table.  Keep in mind that most competitions will bring out a flight to the judges all at once in a Styrofoam cooler which generally won’t have ice in it.  Your beer may be first in the flight and still relatively cold, or it may be last in a flight of 10 and have been sitting in the cooler for a couple hours.  For the sake of this exercise, leave it out for about 20 minutes.  The first thing you’re going to want to do is visually inspect the bottle.  It should be free of any markings or labels that could be considered identifying.  A quick shine of the flashlight through the bottle should reveal any sediment or floaters.  Judges will use this when marking the first section of the score sheet:

Now, we can finally pour the beer.  Pop the cap and pour about 2 or 3 ounces into the cup.  You want to do this relatively vigorously.  Since you’re not pouring much, you want the beer to have a chance to create foam and aroma: 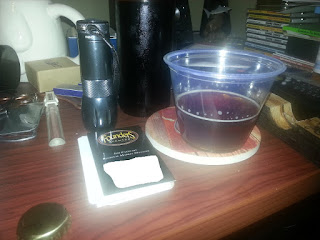 The first thing a judge is going to do at this point is smell the beer.  You’re looking for any fleeting aromas that may show up.  You want to write down everything you smell.  Every characteristic of the malt, hops, yeast derived esters, and anything else.  Whatever you smell just write it down.  In the case of this beer, there were moderate dark fruit aromas like dark cherries and plums, medium low acetic acid aromas (think vinegar) with a touch of lactic acid, low spicy phenols (similar to clove), not much hop aroma to mention, and no diacetyl detected (the smell of movie popcorn butter to me, but others describe it as butterscotch).  A good general guideline in a competition is to be able to do all of this in under a minute.  We don’t want to even consider score at this point.

Next we move on to the appearance.  You want to look at the beer color, clarity, and head retention, head color, and texture.  This should be an even quicker section.  The beer I was sampling was a coppery amber in color with a very slight white head, good clarity, and a light ring of many fine bubbles ringing the edge which did persist.  A quick look at the style guidelines for Flanders Red show that it hits most of those marks although the head was a little lacking.  Appearance is only 3 points total, so we’ll knock a point off for that and call it 2/3 for appearance.

We’ve had the beer in the glass for a few minutes now, and it’s finally time to taste it.  You want to inhale through your nose as you take a small sip (maybe an ounce) and swish it around your palate.  Take note of everything you’re tasting.  Just like aroma, we’re looking for characteristics of the ingredients and fermentation characteristics, but now we’re also looking for balance and finish/aftertaste.  This beer had moderate high dark fruit (dark cherry and plums) with a medium low chocolate flavor that came through mid-taste.  Medium low spicy phenols with a low alcohol sweetness were also there.  Finally there was a moderate and drying sourness that finished similar to a red wine.  No hop flavor or diacetyl came through.

At this point would be where we would start considering score.  Think about the overall beer as well as how it comes off within the style.  Using the style guidelines and considering it a bigger version of a Flanders Red, this beer was in the high end of the “Very Good” range.  It was generally within style parameters, but could have used a little more carbonation and complexity.  With that in mind, we can score aroma (after noting any changes in aroma as it warms, i.e. the light chocolate aroma).  The high end of “Very Good” is about 75% of perfect, so we’ll call this one a 9/12 for aroma and a 15/20 for flavor.  Flavor should take you 3 or 4 minutes in a competition since it’s the biggest percentage of overall score.

Mouthfeel should be another relatively quick section.  You want to consider body, carbonation, warmth, creaminess, or any other palate sensations (harsh astringency or soapy slickness from diacetyl for example).  This beer was medium bodied with low carbonation.  It was tart and moderately acidic with a medium low warming sensation from the alcohol.  Despite the tartness, there was no astringency (suck on a tea bag for this mouth-puckering feeling).  There was no diacetyl slickness.  The dryness lingered only slightly.  When taking style into account, the carbonation was a little lower than expected, so we would only dock it a point and score it 4/5.

The final comment section is overall impression.  This is where the line is usually drawn between a good judge and a great judge.  All the rest of the sections should only address what you can sense (see, smell, taste, or feel).  Overall impression is where you address the drinkability and feedback.  This is where you tell the brewer how they can make the beer better fit the style.  The most important thing is to be constructive.  The brewer paid money to enter the competition, so give them some common courtesy.   In this case, it was a very good beer, but the carbonation seemed a bit on the low side.  There are a few ways to fix this, but since a judge has no way of knowing the brewer’s specific process, we have to offer up multiple possibilities.  If the beer was bottle conditioned, the carbonating sugar could be increased, or if the beer had attenuated so low that there was very little sugar left, krauesen from a similar beer or starter sized batch can be added to produce the same effect.  If kegged, the PSI on the CO2 should be raised about 10-20% higher and the beer agitated to allow it to dissolve in solution.  Another thing that would have helped it would be a little more complexity and character.  Since a Flanders Red would have some Munich or Vienna or possibly a specialty crystal malt like Special B, either substituting a portion of melanoidin malt (10-20%) for some of the Vienna or Munich malt or adding ½# of Special B per 5 gallons of beer would give it a little extra character to help it stand out.  I scored this one 7/10 overall based on the overall “Very Good” range I put it in.

The final step in a real judging competition is to tick the checkboxes for any descriptors.  Some of these are neutral or expected depending on style, and others are generally bad.  For this beer, the Alcoholic, Phenolic, and Sour/Acidic boxes were appropriate for style, so did not signify a bad thing.  This beer wound up being a 37/50 at the end of it.  Depending on what it was up against in the flight, it may have advanced to mini-Best of Show (where a big category will have the medals picked from the best of each of the flights) or even placed in a small category.  The interesting part of the mini-BOS is that if a beer advances, scores go out the window.  A subset of judges (usually the higher ranked judges that judged the flights) will take the top 4 or 6 beers and taste them side by side to determine which beer best represents the style guidelines.  Hopefully this information helps you out when deciding to enter beers in the future.  If you want to score well with a judge, you need to learn to drink like one.  ;)
Posted by Unknown at 2:00 PM